HomeToddlerBehavior-PsychologyHow to overcome children's fear of the dark

How to overcome children's fear of the dark
Print

Fear is a normal part of life for all of us, including young children. It tends to start when you try something new, something that you’ve never experienced before, something that is an unknown. For kids, this happens almost every day, so fear has a lot of opportunity to rear its ugly head -- especially at night.

Usually, the fear of the dark occurs at the age of 2-3 years, when they’re old enough to imagine, but not wise enough to distinguish fantasy from reality, This gives the unknown an opportunity to turn scary.

What causes kids’ fear of the dark?

What Parents Can Do?

There are many ways you can help your child by:

With the support of an understanding parent, most kids can get over a fear of the dark in a few weeks. But if the fear lasts longer, it’s time for a conversation with your pediatrician to determine if it's worthwhile for your child to get some help. 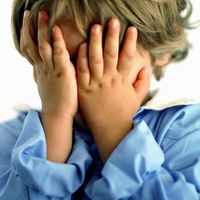