HomeBig KidsBehavior-PsychologyIs it wrong for us to watch TV during our kids playtime?

Is it wrong for us to watch TV during our kids playtime?
Print

Parents often watch their favorite television show while young ones play nearby. But is that background TV affecting your child as he or she plays with toys, even if they don't seem to be interested in the program?

Studies shows that even having the television on in the background can disrupt toddlers as they play with toys; causing them to lose focus during play.

Children were video taped and when the TV was on, the amount of time spent on toy playing was shorter. This was the case even if the toddlers didn't seem to be interested in the game show.

Now you may ask, is the child play worthy all this arguments? SURE it is. Play is important to healthy brain development as it allows children to use their creativity while developing their imagination, physical, cognitive, and emotional strength. It also allows children to learn how to work in groups, to share, to negotiate and to practice decision-making skills. Above all, play is a simple joy to our children.

Studies conclude that “Background TV, as an ever-changing audiovisual way of distraction, disrupts children's efforts to sustain attention to ongoing play behaviors”. They recommend that Parents should limit their young children's exposure to background television.

Needless to say that The American Academy of Pediatrics recommends no screen media at all for children under age 2. 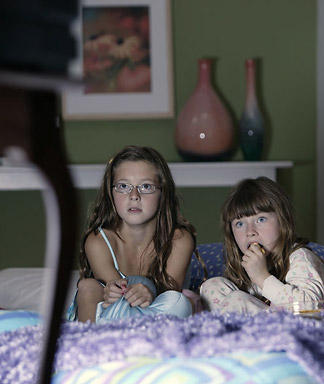