HomeToddlerBehavior-PsychologyADHD may boost creativity in adults

ADHD diagnosis can make many aspects of learning more challenging for children and teens, but a study suggests that some adults with ADHD show signs of enhanced creativity.

During the study, 30 healthy and 30 ADHD sufferers undergraduate students at the University of Memphis were given a series of tests that assessed their creativity in 10 areas. Consistently, the ADHD group came out first of the other one.

Details of the research were published in the latest issue of the medical Journal of Personality and Individual Differences.

“For the same reason that ADHD might create problems, like distraction, it can also allow openness to new ideas,” explain the research team. “While distraction can be a limitation in a traditional learning environment or workplaces with structured approaches, people with ADHD can be very innovative and generate useful and novel ideas.”

“Not being completely focused on a task lets the mind make associations that might not have happened otherwise,” says the coauthor of the research paper. By contrast, people without ADHD take a lot of ideas and pull them into central focus.

These findings offer guidance regarding job options for people with ADHD. They may succeed in jobs that essentially give someone a lot of variety and ability to move around such as sales type positions, as an entrepreneur, or doing anything that allows them to move around, talk to a lot of people, and think outside the box.

Limitations of the study

Another limitation is that the new study was not designed to look for differences regarding whether those with ADHD were taking medication to control their symptoms. 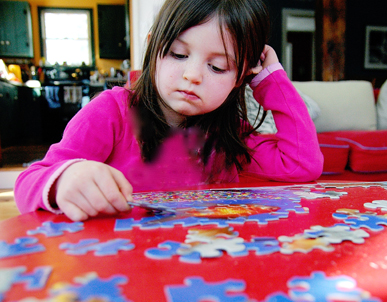 Articles
Can Adults Praise Children Too Much?
TV Violence and our children
Children and sharing
How to supercharge your child's intelligence?
How to Raise a Smart Baby
Getting your to listen
What you need to know about ADHD
Teaching children to share
Help Children Overcome Bedwetting
Delayed Speech
LOGIN TO YOUR CHILD PROFILE
PLEASE ENTER YOUR EMAIL
2356
Home Visit Service