Kids to Stay in Rear-Facing Seat Until Age 2
Print

March 21, 2011 -- In a new policy statement published in the April 2011 issue of Pediatrics, the American Academy of Pediatrics now advises parents to keep toddlers in rear-facing car seats until age 2, or until they exceed the height or weight limit for the car seat, which can be found on the back of the seat.

In addition, they recommend that when children 2 or older reach the maximum weight or height for a forward-facing seat with a harness they transition to sitting in belt-positioning booster seats until they have reached 144 cm tall and are between 8 and 12 years old.

Once they've outgrown the booster seat, the guidelines say all children under 13 should still ride in the back seats of the car.

The previous AAP policy, issued in 2002, advised that infants and toddlers remain in rear-facing safety seats until they reached the limits of the car seat, but cited 12 months and 20 pounds as a minimum. As a result, many parents turned the car seat around on the child's first birthday.

A rear-facing child safety seat does a better job of supporting the head, neck and spine of infants and toddlers in a crash, because it distributes the force of the collision over the entire body.

The ‘age 2’ recommendation is not a deadline, but rather a guideline to help parents decide when to make the transition. Smaller children can remain rear-facing longer.

Types of Car Safety Seats at a Glance 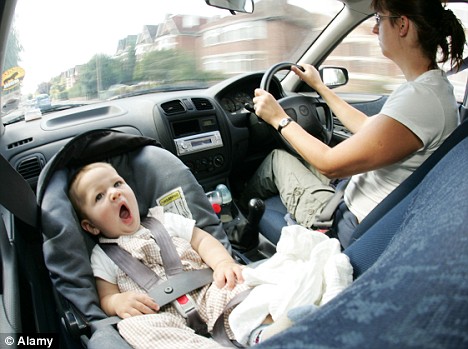